The concept of mental health is fortunately becoming less of a stigma in society and quickly being recognized as a serious condition that requires appropriate treatment. With the unfortunate passing of celebrities due to suicide, such as Kurt Cobain, Robin Williams, Kate Spade and Anthony Bourdain to suicide, along with disclosure of mental illnesses from artists such as Kevin Love, Mariah Carey, Demi Lovato and Kanye West, it should come as no surprise that untreated mental illness has severe consequences.

September is National Suicide Prevention Awareness Month – a month focused on taking the time to not only raise awareness about the concept of suicide, but to reach out to those who have been affected by it (Suicide Prevention Awareness Month). Suicide is defined as the intentional ending of one’s own life, and often is a result of untreated depression. While it is very common to have suicidal thoughts, it is never considered normal to be suicidal. In fact, each year there are about 41,000 suicides, which is a 30% increase from 1999 (Risk of Suicide). There seems to be a strong relationship with suicidal thoughts and underlying serious issues that require attention.

To begin, let’s set a few facts straight. Firstly, suicide does not discriminate. People from all walk of life, races, genders, ethnicities commit suicide. It’s important to pay attention to a person’s actions and words, not what they look like. Secondly, suicide does not happen out of the blue. There are almost always warning signs and while it may not always be direct, most people who attempt suicide have shared their distress or plans with at least one person. It’s also been stated that talking about suicide, especially with teenagers, will make them likely to kill themselves. In reality, discussing suicide brings the topic out in the open and gives the chance for an intervention if necessary (Myths About Suicide).

So, if suicidal thoughts are not clearly stated by someone who may be considering ending their life, what are typical warning signs? Often, there are certain behavioral changes can serve as clues that may predict someone is at an increased risk of possibly ending their life. The National Alliance of Mental Illness (NAMI), cites the warning signs below:

A few other signs from the American Association of Suicidology are not having a reason to live or not having a sense of purpose, hopelessness, feeling trapped like there’s no way out, anxiety, agitation or being unable to sleep or sleeping all the time. Certain patterns of behavior that may be identified as warning signs are putting your affairs in order or saying goodbye to friends and family, giving away possessions, or having more of a calm demeanor in contrast to hopeless despair is also a possibility. 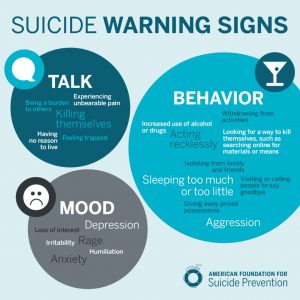 Now that we’ve reviewed typical warning signs of suicide, it’s also important to understand that there are risk factors associated with it. Studies state that 54% of those who commit suicide often do not have an underlying mental health disorder (Risk Factors for Suicide). Statistics also show that while females have higher rates of non-fatal suicidal behavior and suicidal ideation (thoughts), and reportedly attempt suicide more frequently than males do, males have a much higher rate of completed suicides. This implies that there are other factors at play here. NAMI provides a list of risk factors, that include but are not limited to:

Uncompleted suicide attempts may often be considered a cry for help or call for attention and should never be taken lightly. Attempts to prevent suicide should be made without any reservations. Seeking treatment from a medical professional can likely be the difference between life and death. When it comes to mental health, ensuring the safety of the patient, as well as anyone around the patient is of utmost importance. This is usually the biggest factor that helps determine if something needs prompt attention or can be addressed with routine office visits. Screening for depression often includes a series of questions regarding changes in a person’s sleep, energy levels, motivation, feelings of guilt, loss in concentration, psychomotor agitation, loss of appetite, but the most concerning is the question asking about any thoughts of suicide.

If a patient admits to having suicidal thoughts, the next follow-up question to ask is whether they have a plan. This helps to determine if the patient has seriously given thought as to the method and way they plan to end their life. While this isn’t a clear-cut guarantee that they are not at risk of harming themselves, those without a plan usually tend to share that while they have such thoughts, they would never actually go through with the act of ending their life.

Treatment for symptoms of suicidal ideation because of untreated depression often begin with the use of Selective Serotonin Reuptake Inhibitors (SSRIs), which help increase the levels of serotonin in the brain. Serotonin is a brain chemical and is found to be in lower levels in conditions such as anxiety and depression. It should also be noted that SSRIs should be used with caution and be closely monitored, as the increased energy brought about by some of these medications may result in the patient going through with ending their life. For this reason, the side effect profile for anti-depressants usually include the disclaimer stating that they may increase the risk of suicide.

NAMI also suggests that psychotherapy, such as cognitive behavioral therapy and dialectical behavior therapy, can help a person with thoughts of suicide recognize unhealthy patterns of thinking and behavior, validate troubling feelings and learn coping skills.

Some people may be hesitant to see their primary care provider or talk to someone they personally know and remaining anonymous may give them greater motivation to reach out for help. The National Suicide Prevention Lifeline allows individuals to call and speak with them anonymously. They can be reached at 800-273-TALK (8255) or also by calling the NAMI Helpline at 800-950-NAMI. For immediate attention, call 9-1-1. It is important to understand that full recovery in the successful treatment of depression and underlying suicidal ideation is a process and not likely to be an overnight change. It is highly advised that if you or a loved one seems to be struggling with mood changes, behavioral issues, increased anxiety, depression, or having thoughts of harming yourself or anyone else, please call your primary care provider, NAMI or 9-1-1 for immediate evaluation and treatment.

Together by raising awareness, we can all help save a life. To schedule an appointment with a behavioral health counselor, please contact AxessPointe Community Health Centers, Inc. today. Our providers will be more than happy to assist you with any of the resources available to help improve your quality of life. Please call (888) 975-9188 to schedule an appointment today!

Risk of Suicide. (2018). Retrieved from: https://www.nami.org/Learn-More/Mental-Health-Conditions/Related-Conditions/Risk-of-Suicide

Myths About Suicide. (2018). Retrieved from: https://www.suicidology.org/resources/myth-fact

American Association of Suicidology: Know the Warning Signs of Suicide. (2018). Retrieved from: https://www.suicidology.org/resources/warning-signs

Call to schedule at any of our locations.

This website is supported by the Health Resources and Services Administration (HRSA) of the U.S. Department of Health and Human Services (HHS) as part of an award totaling $1,419,765. The contents are those of the author(s) and do not necessarily represent the official views of, nor an endorsement, by HRSA, HHS, or the U.S. Government. For more information, please visit HRSA.gov.

This site uses cookies. By continuing to browse the site, you are agreeing to our use of cookies. OK
X
Go to Top